Duster
About(SCROLL ME)
Duster (ダスター Dasutā) is one of the main characters in Mother 3, and first appears in Chapter 1. He's an amateur thief residing in Tazmily Village. He's one of the characters in the main party without PSI powers, in exchange of that he uses his thief tools.
He used to be Lucky, a Bass player for the band DCMC for three years, this happened after the Osohe castle event in chapter 2, on where he becomes amnesic and gets lost, its implied that the band leader OJ offered Duster Bass classes.
His age is rumored to be between in the ages of 25-30 and he's rumored to be 5'8 (1.76 cm aprox). 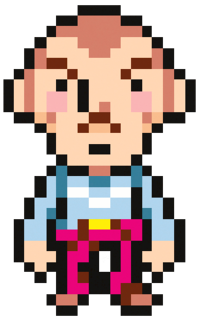 More info
A recent info about duster limp condition has been posted by twitter user @pnkrathian, the following tweet talks about it
If u rename Duster as "Lucky" the game will rename his DCMC name as "Gorgeous".
Hes the second fastest member in the main party, only to be passed by Boney. With this stat, he can do certain actions before a battle begins, such as attacking a character first than everyone and make the enemy flip around.
In Super Smash Bros Brawl, he appears as a sticker that you can attach on Lucas or Ness trophy to increase their leg based attacks, In SSBU hes a primary spirit that increase foot based attacks.
Duster early render for EB64 had blonde hair and green clothing like this image.

THIS SHRINE IS INSPIRED BY MONOE.CRD.CO AND USED TABS FROM RESOURCE.JU.MP